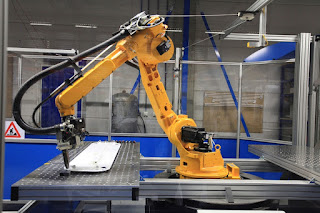 For years we have heard about manaufacturing jobs being eliminated by automation.  In fact since the year 2000, the U.S. has lost 5 million manaufacturing jobs.  A report from Ball State University concludes that while trade was responsible for 13% of these job losses, the rest were lost due to automation. Everyone has seen video of robots on factory floors, performing repetitive tasks such as welding or lifting heavy parts.  By the end of 2017, there will be nearly 2 million robots operating worldwide.  South Korea, Japan and Germany have the most robots per manufacturing employee, while the U.S. is in fourth place.
But automation is moving beyond just robotics and now includes any jobs which can be done by computers.  The McKinsey Global Institute estimates that 45% of the activities people are paid to do today could be automated using technologies that are currently available.  Automation has already had a significant impact in the fields of Finance, Law, and Healthcare, and is rapidly moving into other disciplines.  It's time for us all to give some serious thought to how to stay relevant in this new world.